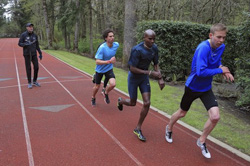 “Just finished reading The NY Times article. Fake news? Seems like they did their homework but who knows? Seems pretty real to me...

The focus of the article is on Coach Salazar and maybe it should be. But he is a Nike guy. I am sure someone at Nike is pushing him to the brink.

I am sure it was Phil Knight, founder of Nike, before but he is gone now. He made his billions and passed the baton. But his ways continue... let me explain.

Nike is a bully as I know when I was publishing RW. Win at all costs. Phil didn't like the results of our shoe issue so what did he do? He pulled out all Nike advertising in RW and told everyone I was paid by another shoe company to rank their shoes higher. I was even investigated by a government agency who found nothing. There was nothing.

Nike was spending over a million dollars on ads then, our biggest advertiser. They went on the offensive and attacked me personally. They knew we had over two millions loyal readers and they did not want to attack RW. So they attacked the publisher, me.

They were bullies. They even started their own running magazine and shifted more advertising to our competitor The Runner. All to hurt Runner's World. I heard that Phil Knight wrote an internal memo that said he needed to stop Bob Anderson and Runner's World.

They won the battle. I will never forget the press release they sent to all their dealers. They basically said I did not rank their shoes number one because another shoe company paid me off. Total bull shit. They really helped our competitor, The Runner.

Maybe I still would have needed to sell RW, the magazine I started when I was 17, to settle my divorce in 1985 but because Nike cost us millions in lost revenues and I had no choice when my wife wanted cash.

This is the first time I have told the real story publicly. Nike has done so much good and they have millions of loyal customers and athelete. I just got in the way.

But after reading The NY Times story my memories of those days and nights come back to me. Blue Ribbon Sports (who became Nike) was my first advertiser spending a total of $25 on a two spread spread in my second issue of Distance Running News in July 1966. Phil Knight most likely signed off on the ad, the same guy who tried to buried us years later.

Nike wins at all costs. They are a power house. They will go on the offensive.

But I wonder how could any athlete think it is okay to have some substance injected into their system. A procedure that can take up to four hours. This is not legal.

Let's get to the bottom of this. Let's get back to real running. If you are at the starting line and you have been injected with something, step out. Do not race. It just is not fair to the guy next to you. Let's clean up running NOW. Don't let the big bucks ruin the sport we love.
Leggi su facebook